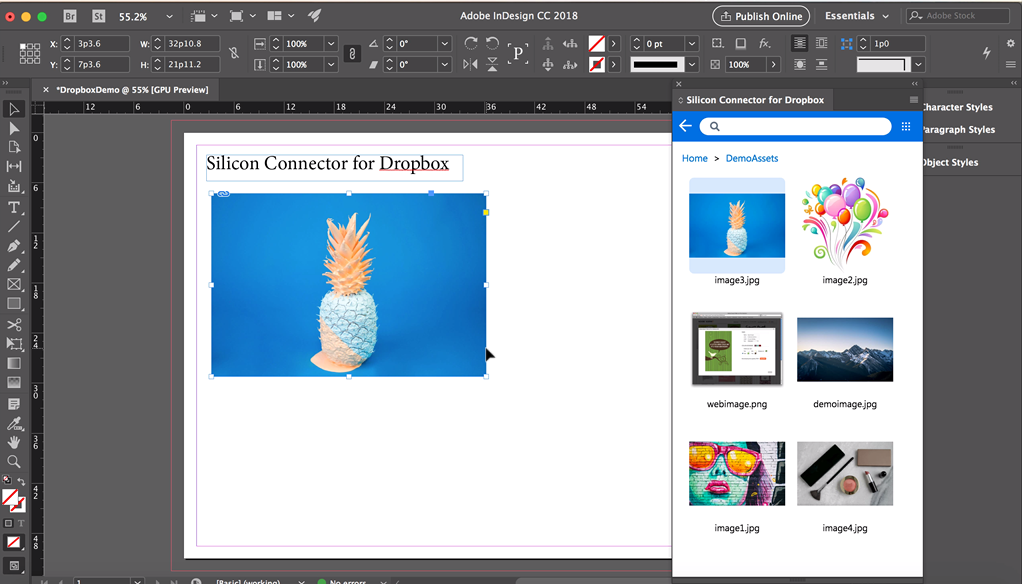 See how Connector for Dropbox works!

Silicon Connector for Dropbox allows users of Photoshop, Illustrator and InDesign to browse their files stored in Dropbox without leaving their favorite Adobe Creative Cloud application. A user can navigate their Dropbox account, preview, open and upload files quickly and conveniently from within InDesign, Photoshop and Illustrator . InDesign users can also create direct links to Dropbox files by simply dragging them from the Silicon Connector for Dropbox panel onto the page. This allows the image source to live within Dropbox and stay up to date for all users, without the need for local storage. If an image changes in Dropbox, anyone using the image in InDesign will be notified so they can update to the latest version with the click of a button.

"This collaboration is a game-changer for designers who use Dropbox," said Marty Mickelson, CIO of Silicon Publishing. “With the new Silicon Connector for Dropbox, users can easily share their work with teammates and clients, without having to worry about broken links, version control, or duplicate copies of projects.

Silicon Publishing's team of InDesign experts and first class developers are excited to provide the power of Dropbox to our users. With over half of Fortune 500 companies using Dropbox and over a billion files uploaded to Dropbox every day, Dropbox has become a household name. Silicon Publishing is proud to work with Dropbox to help Adobe Creative Cloud users streamline workflows and easily access their favorite tools.

Learn more about our partnership with Adobe. We are a global web to print and automotion partner for Adobe products.